The full details of the clean air zone (CAZ) plans have finally been revealed and are set to include a small city centre charging zone, applicable to non-compliant private vehicles, which will be charged £9 per day, as well as non-compliant buses, coaches, taxis and LGVs. The cost for larger vehicles is £100 per day.

A series of mitigation measures have been set out in a bid to support people through the transition and ensure the “burden doesn’t fall on the most vulnerable”.

The plans are set to be approved by Bristol City Council’s cabinet on February 25, before going to the government’s Joint Air Quality Unit (JAQU) the following day. They are due to be implemented at the end of October this year.

Cumberland Road will be closed to inbound general traffic under the new measures.

Confirming the details on Wednesday, mayor Marvin Rees said the council has both a moral and legal responsibility to deliver a plan for tackling air pollution but said he has always stressed to the government that a CAZ is a “very blunt tool”.

“As we begin to introduce CAZ, we have to do it with a mind to the impact on household incomes and the impact on businesses,” said Rees.

“We have been making that case from the beginning. We want a just transition; we do not want the burden falling on those who are most vulnerable.” 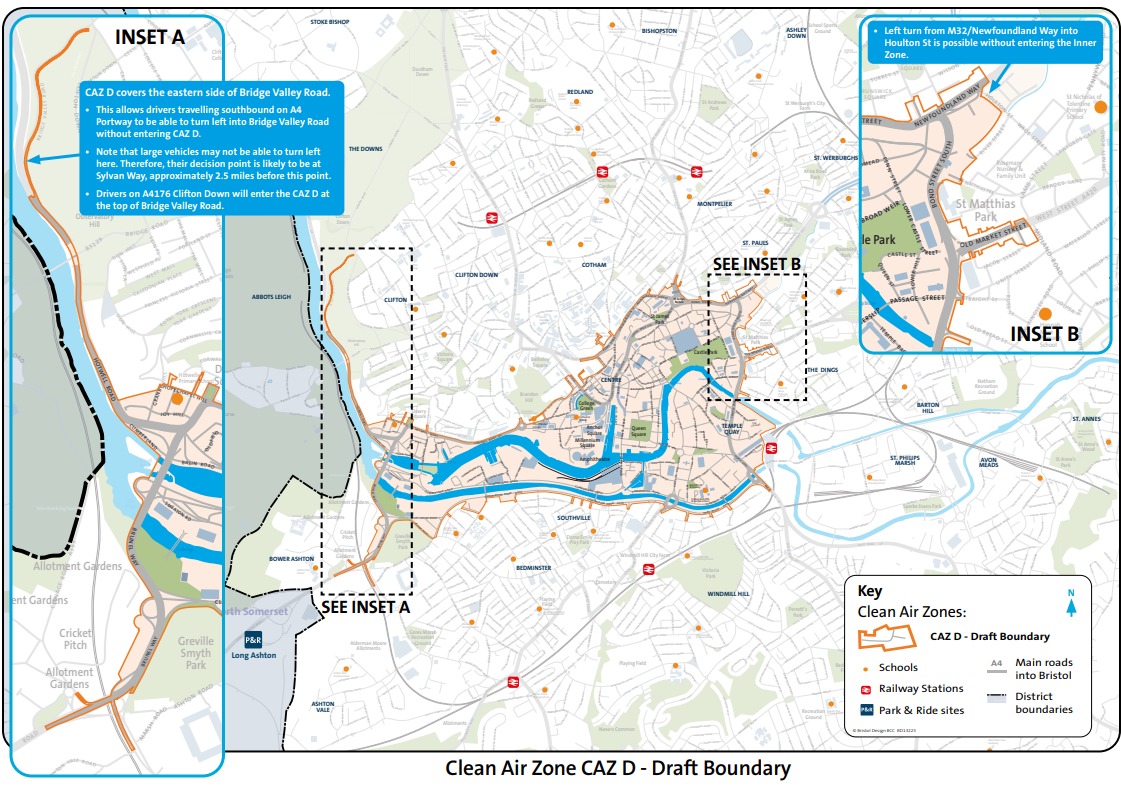 The mayor had previously expressed a hope that the city might be able to reduce air pollution by changing patterns of behaviour but he said the data and modelling show a small clean air zone will deliver compliance in the shortest possible time – as required by the government.

If traffic returns to pre-Covid levels, the total number of non-compliant vehicles expected to enter the CAZ area on an average day is 74,700.

Bristol-based blue badge holders, residents living within the zone and low-income households driving into the city for work are among those who will be eligible for an exemption for at least a year from when the CAZ is implemented. Most will need to apply for an exemption.

People visiting city centre hospitals including the BRI, Children’s Hospital and St Michael’s will also be exempt from the charges for at least a year.

Those visiting more than three days within a week will be able to receive a permit for a set period on a case by case basis. All patients with appointments are exempt and the proposal is to have a ‘pod’ in the reception area of the hospitals where patients can enter details to be added to the permitted vehicle list for the day.

Disabled passenger vehicle tax classes 78 and 85 are fully exempt, although the owners of these vehicles will still need to apply for an exemption.

Bristol City Council has said it will be monitoring the take up of exemptions and the impact these have on compliance during the first year of the CAZ, when they will be reviewed.

The idea is to allow time for people to upgrade to cleaner vehicles and take advantage of the financial support and scrappage schemes.

Full details of the Cumberland Road restrictions, which will affect eastbound/inbound traffic only, are yet to be confirmed. It is expected the closure will be somewhere near the existing bus gate east of Gas Ferry Road and will be implemented when current roadworks are complete.

The council has said it will discuss the exact location with local residents and business.